The recordable optical disc market, which was valued at approximately US$ 3 Bn in 2018, is estimated to see bearishness in the coming years, as per the new report published by Future Market Insights (FMI). As per the report, revenues are likely to taper off at a CAGR of -3.6% during 2019-2029, as a general sense of obsoleteness looms large. The sluggishness is despite the reliance on optical forms for storage, according to FMI’s research.

According to the report, emergence of prominent media-services providers, such as Spotify, Apple Music and TIDAL, started tugging on the popularity of recordable optical disc formats. Media service providers rewrote the rules of media consumption and the adoption rate of these media streaming services grew by leaps and bounds. Skyrocketing subscriber base of these prominent media service providers resulted in some major revenue dips for the recordable optic disc market, creating significant tribulations for market players to make effective sales pitches.

Request a Sample of this Report @ https://www.futuremarketinsights.com/reports/sample/rep-gb-691 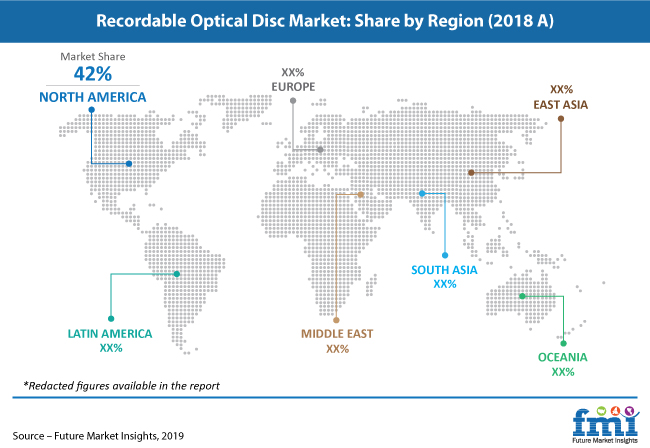 “Evolution of non-physical media with greater storage capabilities has led to marked decrease in consumer preference. The shift toward cloud-based suites is also pushing down the sales of recordable optical disc, as cloud storage provides an agile and reliable platform for data storage and accessibility.” says the FMI report.

The report opines that blu-ray disc will continue being the top-seller, with revenues estimated to approach US$ 2 Bn in 2019. Optimum storage capacities with ‘best-in-class’ features remain two of the key selling points of blu-ray discs. Sales of recordable optical disc via online channels will continue to put offline channels in the shade. The convenience of choosing from multiple varieties and availing best deals and offers are two of the major growth pacesetters of online channels over offline, states the research study.

Though sales of recordable optical disc for individual or personal applications are facing tough times, the reliance of professional units on sturdy disks for local data storage continues to be intact. Blu-ray formats still remain a preferred choice across software/IT firms and media industry, as quality and storage capacities of blu-ray discs have remained profound in comparison to other optical disc counterparts.

Professional Use of Recordable Optical Disc to Show Positive Leaps,

Apart from product features, brands are also focusing on nourishing the longevity of their recordable optical disc offerings via reflective layers. In addition, strategic partnerships seem to the best way forward for the brands to sustain with considerable revenue growth, states the research study. For instance, in 2018, Sony made the official announcement of optical disc archive system with support from the partner companies. Moreover, it also signed a definitive License agreement with Mitsubishi Chemical Media Co., Ltd. (MCM), which is aimed at rolling out new and advanced models of optical disc archive cartridges.